Engineering and Data Science
Article
Should we be concerned about the advances in artificial intelligence? 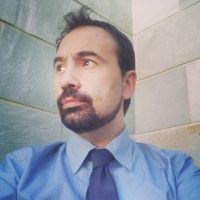 The news media, both general and specialized, have recently published articles that reflect the surprising new advances in the fields of artificial intelligence and robotics.

That’s why, in light of more news about these enormous advances in artificial intelligence, some people are wondering whether we should be concerned. Recent steps have been taken to keep an eye on AI and robotics, some of them promoted by important figures like Elon Musk. There’s even been a proposal in the European Parliament to make it obligatory that all manufactured robots incorporate a ‘total disconnection’ button in case they rebel.

But the fact is that these fears spring from a culture acquired through science fiction films and novels.

Many of us have grown up reading novels by Asimov, with their laws for robotics, or with movies like 2001: A Space Odyssey or Terminator, in which the computers and the robots were the villains who wanted to destroy humanity.

But the reality is far removed from what we saw in the movies. Artificial intelligence can do spectacular things but it doesn’t have –and never will have– awareness. The probabilities that a robot would rebel against humanity as about as great as your coffee pot rebelling against you.

Does this mean that we shouldn’t worry about artificial intelligence?

Unfortunately, no. There are other dangers that should concern us more. I’ve said that these systems lack their own consciousness, and also any kind of empathy: likewise, unless we teach them explicitly, they don’t know how to differentiate between what’s politically correct and what’s not.

Most of these systems learn from past examples, and if we are not careful with this data, we can build models that reflect unacceptable behavior (racist, sexist, unsupportive…). In fact, this happens.

An example: an artificial intelligence system that decides what is the fairest salary to offer a worker in the basis of his past experience and capacities. If that system is devised without eliminating attributes such as sex, and receives its training through historical data (in which, it should be recalled, men earn more than women), this system of artificial intelligence will learn that a man should earn somewhat more than a woman merely because he is a man. This is the type of behavior that should concern us and that we should watch out for, and not that they might decide to conquer the world.