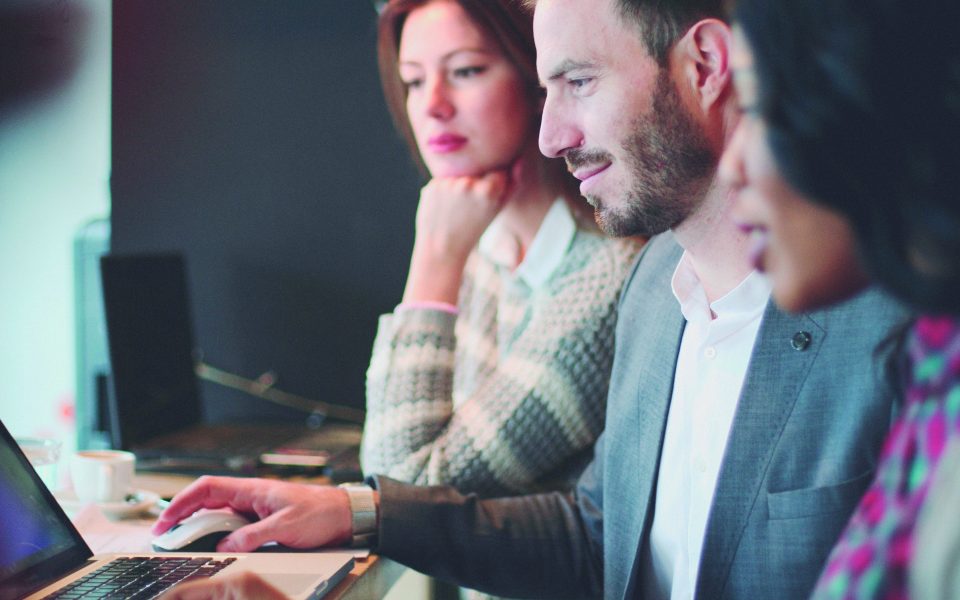 Joan, Sofía, Carlo, Quim and Esther are five young people who work in a design studio Barcelona. “I like to work. Sometimes I paint and sometimes I do the lettering. I don’t know what autism is. Sometimes people understand me and other times they don’t,” says Joan on a video. At La Casa de Carlota, which is the name of the studio, five people work with special creativity. They are also people with intellectual disabilities, but they are outstanding for their professional value.

Among the clients of La Casa de Carlota are the Barcelona City Hall, Nestlé and Mahou, which are all looking for a different vision for their ad campaigns. “People with Down’s syndrome maintain that vision, which we lose when we cease to be children: it hasn’t been conditioned, it’s direct and very fresh,” explains Sergi Capell, one of the partners in the firm. José María Batalla, the other partner, says in the video (video of the day on the webpage of The Guardian) that he considers himself clever because La Casa de Carlota has discovered a lode of creativity that’s yet to be exploited. “They have a way of seeing the world, of interpreting creativity and of innovating that’s very hard to find,” Capell adds.

La Casa de Carlota has integrated this diversity very naturally, and while it’s an example of good practice, there’s still work to be done. An example, from the educational field: students with dyslexia have an added difficulty when it comes to putting the answers to a multiple-choice exam on the screen. For this reason, Universidad Europea’s Attention to Diversity Unit detected that their answers tended to be moved one box to the right of where they should be. The Unit made it possisble for professors to now check whether dyslectic students have given the answers that they really wanted to give. Because these students usually have short-term memory problems, the Unit tries to improve planning so that they don’t have several exams on the same day. “We propose the most inclusive measures possible, which means improvement for everyone,” explains Sonia Escorial, who is responsible for the Attention to Diversity Unit, which currently serves 98 students. The Unit also offers a specific training plan for the professors.

The University offers attention to diversity on demand: the student contacts the Unit and presents his or her medical or neuropsychological diagnosis. After studying each case, Escorial gets together with the professors to analyze methodology and systems of evaluation. Although certain disorders are stereotyped, each student receives personalized attention, because each situation depends on many variables. The aim is to detect possible adaptations that will guarantee equal opportunities for each student –though without conceding advantages. Escorial gives an example: “If there’s a student who needs glasses and I take them away for an exam, it wouldn’t be fair.”

La Casa de Carlota and Universidad Europea are examples of good practices in the area of diversity, which has earned them the B Corp seal, a certification for companies that seek to make a positive impact. “Through the private sector, we’re looking for answers for the principal social and environmental challenges, and trying to get companies to be agents for change,”  explains Pablo Sánchez, of B Corp Spain. In 2015 Fortune magazine recommended following the guidelines of B Corp as a key to success. “Great employees want to work for companies that stand for more than just profit, so it will give you a leg up in the talent wars. And it’s likely to win you more of the kind of customers you want to keep too,” the magazine wrote.

Sánchez explains that B Corp company must dedicate considerable performance in social and environmental areas. This process begins with the company’s own  governance and employment policies; continues by applying high standards of transparency; and ends by making a commitment to changing its statutes to make social responsibility one of its objectives.

There are three B Corp profiles: the startups, “born with the conviction that they meet a social and environmental need”; middle-sized and family companies “with a clear orientation toward a culture of sustainability,” such as the Veritas ecological supermarkets; and multinational companies like Danone España or Triodos, which have joined international firms such as the Change.org global platform, the Brazilian company Natura Cosméticos, the Argentine textile company Patagonia and the Ben & Jerry’s ice cream company. The initiative began in 2006 in the United States and there are now 50 B Corp companies in Spain, among them Laureate International Universities, the network that includes Universidad Europea, which received the B Corp MVP 2017 distinction.

Attention to diversity means a commitment to making the University more inclusive. Giuseppe Iandolo, a professor of Psychology at Universidad Europea, said that while deep autism generates incapacity, “autism that is diagnosed in time and stimulated creates a diversity that makes it easier for that person to become integrated in the world.” As José María Palomares, Director of Communication and Institutional Relations at Universidad Europea stresses, it’s about “generating positive impact for our community.” La Casa de Carlota demonstrates that an autistic person can contribute a kind of creativity that you won’t find anywhere else.

Triodos is the first European bank to earn the seal, and its central headquarters in Holland was the scene for the European presentation of B Corp. Sonia Felipe, who is in charge of Communication for the bank, explains that Triodos seeks to unite its concept of an ethical bank with the B Corp movement. Felipe stresses the “flexibility” necessary to adopt an integral focus in complying with the indicators, which makes it possible to take into account the degree of development and the size and the activity of the company. Triodos, with more than 1,200 employees, earned the seal in 2015 and renewed it in 2017. It is in the global top 10 of B Corp companies in the category Long-term Good Governance.

The dairy products division of Danone in Spain earned the B Corp certification in 2017. Jean-Philippe Paré, Director General of Danone Iberia, is meeting this challenge with a sense of “great responsibility… We want to be an agent for change and help provide solutions to the big challenges that our society faces, mostly in the fields of health and wellbeing and sustainability,” he said. Emmanuel Faber, CEO of Danone, has announced the company’s commitment to obtaining B Corp certification as a global entity. España Danone has 2,000 employees and production plants and installations in nine of Spain’s Regional Autonomous Communities. Each day it supplies 40,000 businesses and serves more than 11 million consumers.