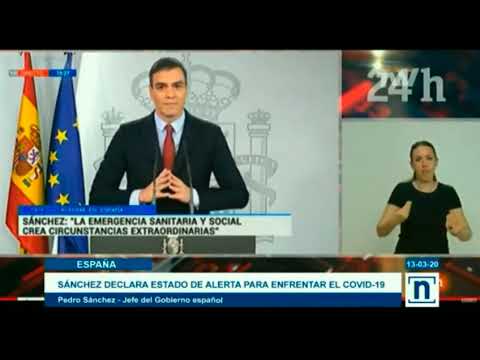 Our only precedent occurred in 2010, although the measures adopted at that time were much more limited

As everyone knows, the Spanish Prime Minister, by agreement of the Council of Ministers, declared a State of Alarm in our country, in effect for fifteen -15- days, as published in the Spanish Official State Gazette, Official Decree 463/2020, of March 14, declaring a state of alarm to manage the current health crisis caused by COVID-19.

Adopting this measure is the response set forth in our constitution that enables the executive branch to act in situations such as the one we are experiencing these days, a global health crisis, that is having a major effect on countries such as Spain and Italy, in addition, of course, to China, where it began.

The power to declare a state of alarm in a situation like the current one is outlined in article 116 of the Constitution of 1978, which also indicates that this state, together with the states of exception and of siege, are regulated by Organic Law. In compliance with this mandate, Organic Law 4/1981, of June 1, was passed on the states of alarm, exception and siege -hereinafter referred to the LOEAES-. Article 4.b of this act regulates the state that is currently in effect.
In other words, the constitution itself includes articles that provide for limiting the rights granted in it, as a means of “saving” the system, as long as the requirements established for that purpose are respected and that everything is subjected to parliamentary and judicial control.

It is important to mention that the state of alarm is the least severe of the three. It is an initial response provided by the constitution to face an exceptional situation of a non-political nature, which sets it apart from the other two. It enables the Government to make certain decisions that would otherwise have been vetoed, only during a set period of time (initially fifteen days). That period of time can be extended with the authorization of Congress if the circumstances that led to the declaration are still in effect, specifying the scope and term of the extension. In other words, the evolution of the COVID-19 virus will be the determining factor as to whether or not the current situation is maintained by means of a parliamentary extension, or it is lifted and the measures adopted are withdrawn.

With this declaration, the Government has been able to concentrate greater power. For example, all security forces, whether national, regional or local, are now under the delegated authority of the Minister of the Interior, and it is now possible to search individuals to guarantee that COVID-19 is contained, which is the grounds for the Government’s declaration, as the official degree itself expressly recognizes.

Therefore, we are faced with an unusual decision, as demonstrated by the fact that in over 40 years since the Constitution was enacted, this is only the second time that a Government has made such a drastic decision. The first was on December 4, 2010, in conjunction with the aviation crisis caused by the air-traffic controllers’ strike.

The difference between one situation and the other is decidedly different, as clearly illustrated by the LOEAES article that enable adopting one and the other. While, as we have already indicated, the current Government has based its actions on article 4.b (in 2010 it was 4.c), the measures adopted were also much more limited, aimed solely at restoring air traffic and normalcy at the airports subordinate to AENA.

As a result, we are facing a situation that has no parallel in our recent constitutional history, which limits, but does not abolish, our rights, in order to contain a virus against which there is currently no certain treatment, limiting its effects, as we are seeing in the media.